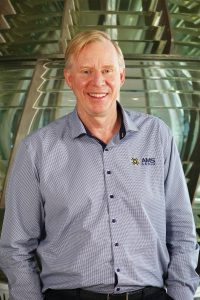 Nigel Bagster took over as the CEO of AMSG in September 2020 having previously worked for L3 Harris as the MD of their C5 business in Australia.

Since leaving the Australian Army in 2001 where he served as a logistics and engineering Officer for fifteen years, Nigel has predominantly worked for a number of Primes in the Defence industry including BAE Systems where he held roles in Australia as a General Manager of their Support Service business, and the UK where he was Head of Programmes for their Combat Vehicle support and upgrade business.

Working for Leonardo in their Defence Electronic business, Nigel was focussed on Naval Communications leading a programme supporting the ANZAC Class Frigate upgrade initially in the UK and then Australia.

Nigel is a graduate of the Royal Military College Duntroon and The University of Queensland where he completed his MBA. He has three daughters all now at University, enjoys road cycling and cross county mountain biking.